This week’s cards are from the Mystic Faerie Tarot by Barbara Moore and artist Linda Ravenscroft.

The first card is the Four of Swords: 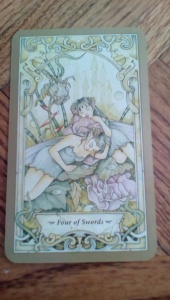 The Four of Swords indicates that you might be starting your week feeling overwhelmed by a life situation. Mental exhaustion isn’t conducive to effectively handling things. Take a break from it and rest. You can guarantee that whatever it is will still be there waiting for you when you come back to it refreshed. Who knows you may even have an epiphany as you sleep.

The second card is the Knight of Wands: 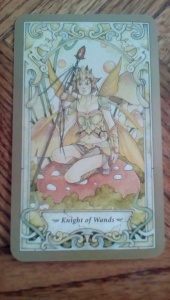 The image on the Knight of Wands card shows a strong and determined looking warrior. She is waiting for a task to be given to her. She is so poised and ready that it is apparent that she won’t be kept waiting for long.

The third card is the Priestess: 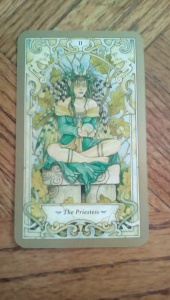 The Priestess charges us of the task of figuring out what we value the most. The answers that we seek can be found by completely immersing ourselves in those things that we value. As you can see by the image, the Priestess is planted firmly, yet calmly and peacefully in her spot, waiting for clarity. Connect with what matters to you in the ways that work for you, whether through meditation, prayer, sitting at your altar, spending time in nature, hanging out with your family-the choice is yours.

The early part of this week might find you feeling taxed by a situation that you’ve been dealing with for a while and feel as though you haven’t the energy to deal with it any longer. For the time being, don’t. Step away from it so that the tension and confusion around it can give way to finding a solution later.

The Knight of Wands has shown up to show you that you’re ready for an important task of some kind. The Priestess coming in behind her indicates what the task is, and I love this. Oftentimes, we’ll have a feeling or be given a message such as having an important task, then have to figure out what it means. Not so this week.

The task being handed to us is to steep ourselves in the things that matter to us most. The Priestess is wise and has a deep connection to herself and the world. The connections are so deep that the lines which normally separate a person from the different aspects of self as well as the rest of all that is begin to fade. Take the time to settle in and deeply integrate all of these things by immersing yourself as fully as you can in the things that matter to you deeply. Listen closely later in the week, because the answers and wisdom you’ve been seeking will naturally begin to flow.